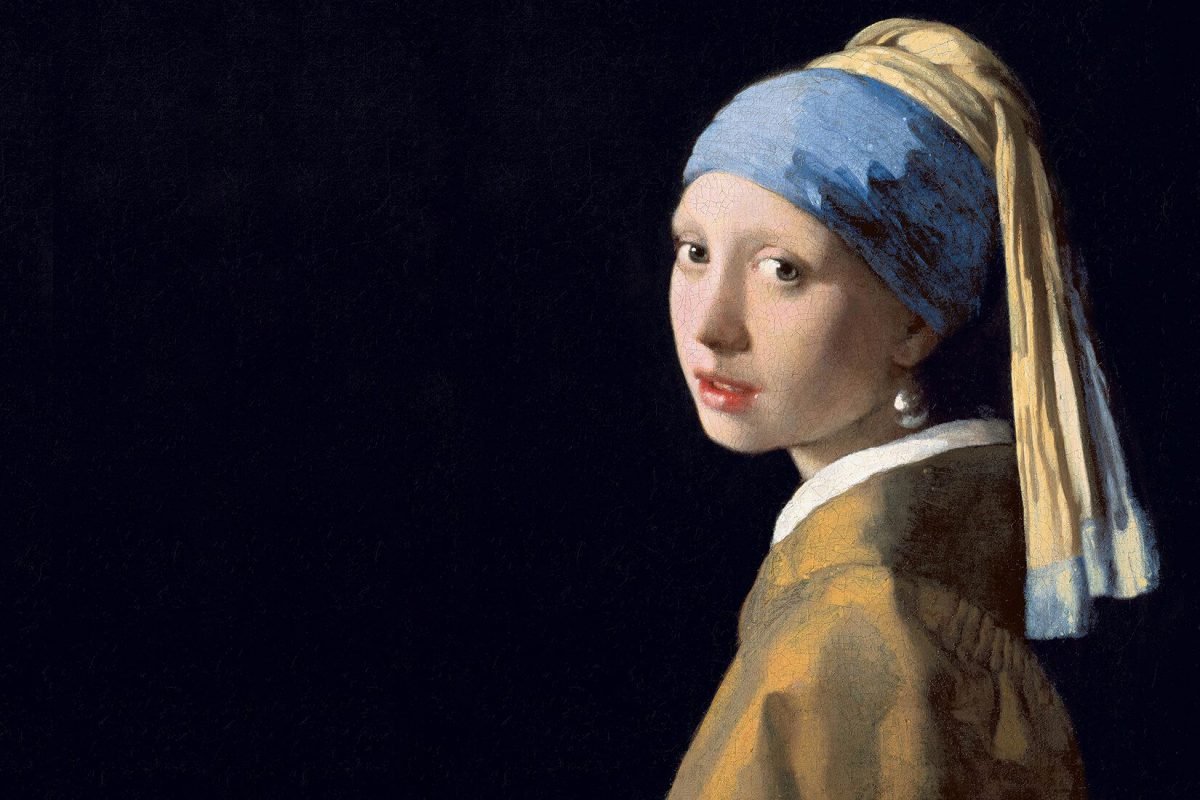 The Girl with the Pearl Earring, a famous painting by Johannes Vermeer. Why is this amazing painting so famous? Once again it summarises a very important Zeitgeist in history. This is a painting capturing the Dutch Golden Age. She is also known in a loving way as the Mona Lisa of the North meaning she is just as famous as the Mona Lisa but in the north of Europe and originates from the North of Europe which is Holland.

So this is a time where we have got the VOC (Vereenigde Oostindische Compagnie), we’ve got colonialism, we’ve got the Dutch really setting out to conquer a lot of other countries and there’s quite a race for the oceans and to see who can set up the most colonies. Countries that set up colonies were Portugal, Spain, Britain – and the Dutch played a major role.

The VOC was a massive company and it brought a lot of trade and a lot of wealth to Holland: there was this boom in the middle class and people started buying bigger houses. Bigger houses means empty walls and empty walls mean they need more art so the art trade really boomed. The Dutch delivered some of the most incredible artists in this time such as Vermeer, Rembrandt, Van Eyck – all these geniuses that really carried this tradition of excellence in oil painting.

The Girl with the Pearl Earring represents quite a few interesting things. She is a beautiful girl and her she’s wearing this wealth which is this massive pearl I mean this pearl is absolutely huge almost unreal, it’s hard to believe you could find a pearl that size. Then she is adorned with this headdress which is definitely not Dutch, if you think of the headgear back then in Holland it didn’t look anything like this, it is almost like a Turkish wrap definitely Middle Eastern in origin. This definitely shows the trade and the connection with different cultures.

The girl in the painting is also wearing a slaves dress and this garment really supports the idea that she was actually a maid in Vermeer’s his house – I don’t know if you guys have seen the famous movie about this painting but it’s worth a watch. So she is wearing this garment and Vermeer is trying to show that the middle class is wealthy enough to actually have slaves and it’s actually showing that Vermeer is so wealthy that he can actually have a slave sit and pose for him for 6 months so he can finish the painting.

So these three interesting elements really capture the Zeitgeist of the time: we’ve got the opulence of the middle class, that they’ve that got slaves at their disposal; we’ve got this wealth represented in the pearl which is this richness found in the wealth exploited from different colonies; and then we’ve got the interaction with trade and the busy city ports where we’ve got the Turkish head wrap – exchanging products with India, with turkey.

Another interesting thing is her mouth that is slightly parted and slightly open represents sex, so it’s actually representing a more of a physical relationship and intimacy. So there’s always this big speculation whether Vermeer and this slave actually had a love affair or not, and what exactly was their relationship like. Which also kind of shows the position of women in society and their suppression by society through power dynamics.