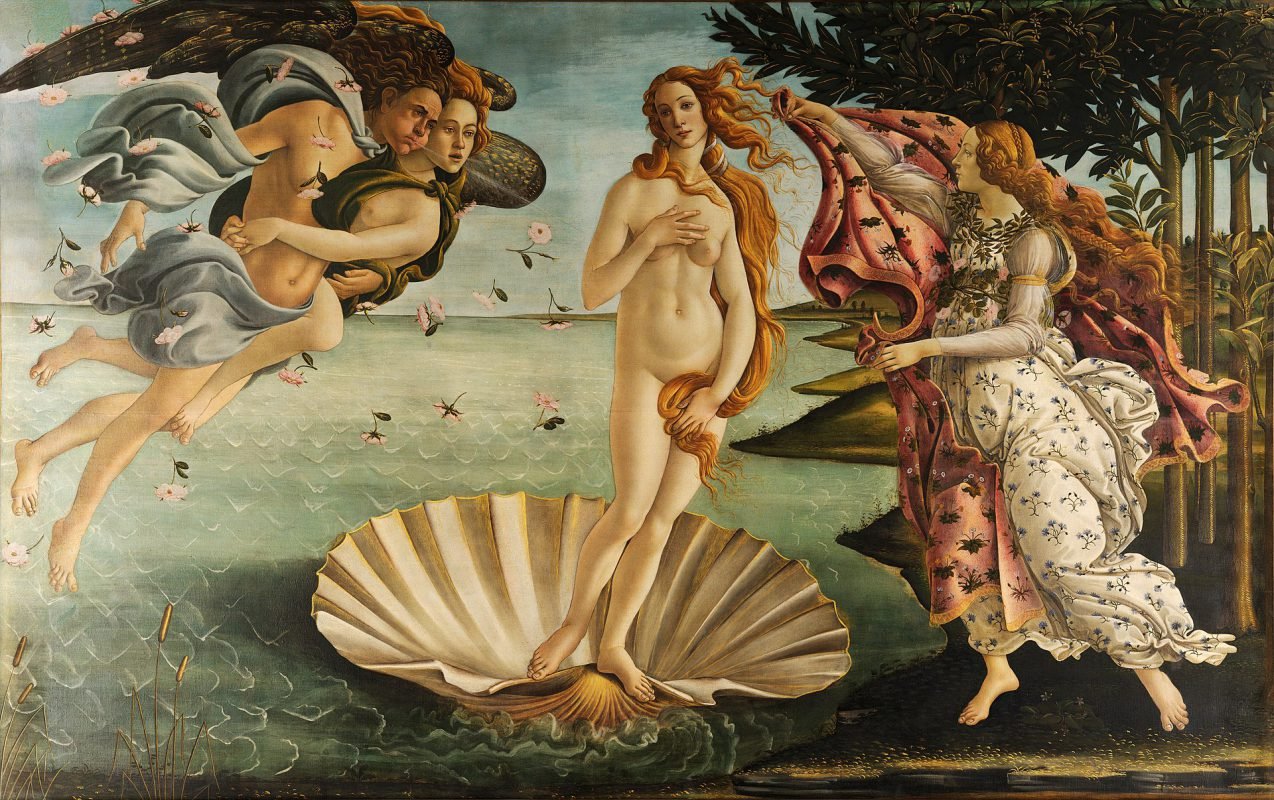 So if we think of early Renaissance it is Giotto, middle Renaissance Botticelli then we get Da Vinci moving into high Renaissance with Michelangelo, and for Michelangelo we get Rafael the New Kid On The Block, and that is the order you need to know.

This painting caused a bit of a scandal and once again it really summarises the change in thinking and thought process during the Renaissance and that’s probably the most important point. If we think of pre-Renaissance we think of medieval art, we think of Catholic driven art, Byzantium art, art driven by the church with a lot of rules.

What the Renaissance did, remember Renaissance brings new birth, is that it revived an interest in the classics, they absolutely fell in love again with the Greek classical art and thinking and Philosophy. A lot of this was banned by the church during the dark ages so for 1000 years the world didn’t really have access to this. When they discovered a small Greek town and dug up all these beautiful statues outside Florence, the Medici family funded the Renaissance and they decided we need to get more of this look at this amazing art, our art really sucks we need to up our game if this is what our ancestors did we can do so much more. This really sparked their interest.

What we see in the Renaissance is kind of moving a little bit away from the church and the church governing art. We get the first statues where people were for the first time in 1000 years allowed to make statues because in the middle ages that was banned because they were seen as Idol worship and where Moses in Exodus bans the worshipping of the Golden calf and that was interpreted that men shouldn’t be making statues so statues were banned.

Now what’s interesting about this painting is that it is not of a Biblical narrative, it is not a biblical story at all it is a classical story, it is of the goddess Aphrodite. In ancient Greek times she was known as Aphrodite and in Roman times she was known as Venus so remember the Romans just took all the Greek gods and slapped on different names and took the whole Pantheon with them.

This is very important about the Renaissance Zeitgeist: we don’t just see Christian narratives, we see a lot of classical pagan stories, legends, myths and this is because a lot of the art wasn’t funded by the church but was funded independently by bankers like the Medici family or other wealthy families of Florence and Milan that wanted to decorate their palaces and plazas.

Another very interesting thing about this painting it’s inlaid with 14 karat gold, all these little leaves blowing in the wind are 14-karat gold it is amazing. Another important part of this painting is the importance of botanicals and plants: every single plant. herb, and flower in Renaissance had a very specific meaning. Unfortunately a lot of that was lost and we’re not a hundred percent sure of all the meanings but we know that Boticelli spent a heck of a lot of time depicting certain herbs and flowers and they’re done with so much intricacy and double zero brushes.

The painting glows. The way that they got the painting to glow is by using egg white, so they mix in egg whites into the oils and put a glaze on it giving it an absolute translucency of the skin. This painting is breathtakingly beautiful it really makes you stop and want to sit in front of it for the entire day there’s no way that a book or a photo can capture all the detail that’s going on in the story.

According to the ancient Greek philosopher Plato, Venus had two aspects: she was an earthly goddess who inspired humans to physical love, but on the other hand she was a celestial goddess who inspired humans to intellectual love. Plato also argued that thinking about physical beauty enabled the human mind to comprehend spiritual beauty. This meant there was a hope that the viewers would have felt themselves being inspired to contemplate spiritual, divine love.

It’s also important to note that Aphrodite is naked and she is kind of covering the most essential parts and back then it was kind of okay if you painted pagan stories as naked as long as you didn’t paint biblical stories naked so a lot of artists preferred to do the classical stories and fables because that gave them licence to really paint naked people and allowed them to really study anatomy.